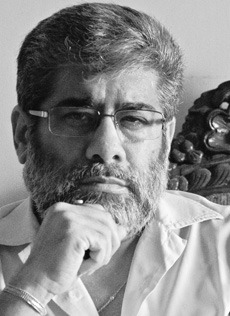 A film maker from India who has recently rediscovered his passion for photography.

Hi, I am Pavan, father of two, beautiful, wonderful children, a daughter & a son. My children are the brightest spot in my life and shall remain so, for all my days on earth, and beyond.....

"I have been passionately involved with Film & images ever since I can remember. While Film making did become my chosen profession, I must confess, I have not yet made a film of which I can say I am the author. I don't know if I ever will. Henry Miller's quote probably serves to explain why: “The American white man (not to speak of the Indian, the Negro, the Mexican) hasn't a ghost of a chance. If he has any talent he's doomed to have it crushed one way or another. The American way is to seduce a man by bribery and make a prostitute of him. Or else to ignore him, starve him into submission and make a hack of him.”

It is absolutely true to say that this is not only the American way but the only way that exists today, anywhere in the world. Having been born a non-conformist, rebellious by nature, I have paid the price, but in the end I am happy and that is what matters. I have made a few films, not entirely to my satisfaction, that have succeeded or failed to some degree, due to various reasons and that is how Destiny works. But although they are flawed, they do reveal glimpses of me and that is not insignificant.

Between Films a body of television work has sustained me over the years and helped me stay sane. I continue to work, on projects offered to me, even if they are not exactly to my liking, for though I do not solicit work, I welcome it as I believe that there is a creative opportunity in just about any kind of work...and I could not survive without something creative to do.

That brings us to still photography. I have always owned a still camera since my teens, but have never been very active, beyond the casual recording of family or travel pictures. Only last year, in 2009 while passing through a very low phase, I realized that my Nikon offered such immediate, continued and unlimited creative possibilities, satisfaction and gratification.
Something that had been lying dormant all my life became an instant passion, and here we are....Now, I try to never be without a camera to avoid missing any chance to capture, in images, my feelings, thoughts and emotions, as portrayed in the world around me.

I feel that my hobby has contributed greatly to what some say is the strong visual content in my Film work. A location is always, almost a 'character' in my films hence the extended recce before each project. As Ansel Adams has said, oftentimes one manages to get to places where it seems God was waiting for someone to click the shutter.

One can spend a lifetime at work or taking pictures which may eventually add up to just a few hours of film, or a few hundred frames..but come to think of it that may be the sum total of ones life."

"Often while traveling with a camera we arrive just as the sun slips over the horizon of a moment, too late to expose film, only time enough to expose our hearts." ~Minor White

*Besides being a professional Film & Television Director, I am open to commissioned work in Portraiture, Nature, Travel, Architecture and can be contacted on Facebook or pavankaul [AT] gmail [DOT] com.

For purchasing any of my photos you can do the same.